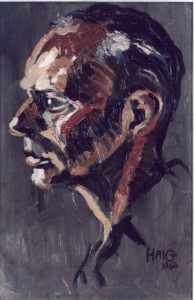 Known as Poppy or Remembrance or Day, Armistice Day was first commemorated at the end of the First World War in 1919, as a memorial day for Armed forces who died in the line of duty. In 1954, in the United States of America, it became called Veterans Day and is an official public holiday. Every year, on the eleventh day of the eleventh month at the eleventh hour, two minutes of silence are observed and wreaths are laid at war monuments.
The British Legion, which sells poppies on this day to raise money for war-injured Allied Forces, veterans and their families, was founded by Earl Haig in 1921. Haig had been in command at the Battle of the Somme in 1916, where 600,000 of his men lost their lives. Dad was imprisoned with his son, Dawyck, in Oflag XII-B, Hadamar, Germany, in 1944. There, Dawyck painted this portrait of him. It’s reproduced in Prouder Than Ever with an extraordinary story about it, now also told in more detail in the Kudos magazine on page 88: 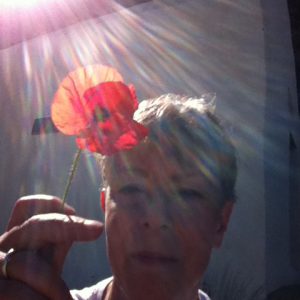 I picked this poppy in May in the village of Sphakia, Crete, where over 6000 Allied Forces were captured on 1 June 1941, my father among them, to remember him and all those who have fought, suffered and died in conflict.