LOYAL TO THE HILL 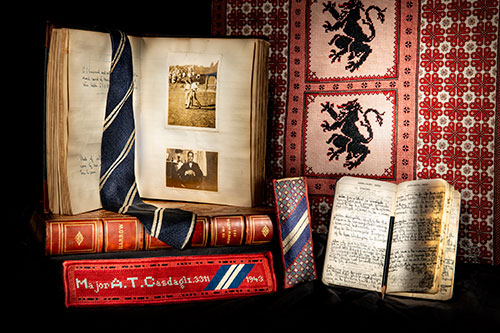 MY HOME + MY DIARY + MY HARROW

LOYAL TO THE HILL is the prequel to PROUDER THAN EVER, the Prisoner of War diary of Major A.T. CASDAGLI (The Grove 19201) and presents the only other diary Cas kept in his life: his Letts’s Schoolboy Diary of 1920, in which he wrote every single day during his first year at Harrow School.

Meticulously accurate, endearing and passionate in its love for the School, this unique document also gives us a fascinating picture of the wealthy Greek community of Salford, Greater Manchester, where Cas lived with his family. We also see, through the observant eyes of this 13 year old boy, the extraordinary times in which he lived, for the Great War still casts its long shadow and the Twenties are about to roar.

The Foreword of LOYAL TO THE HILL is by Peter Hunter, Harrow Master 1985-2018. Dr. George Vassiadis of the Hellenic Institute, Royal Holloway writes its Preface and Adam Ait el Caid (Harrow School 20163), Head of School, its Proem. The endorsement on the back cover is by the Old Harrovian historian and author, Dale Vargas. In addition, this handsome book has an Introduction and commentary to the text by Cas’ daughter, Alexis Penny, who compiled and edited PROUDER THAN EVER. LOYAL TO THE HILL is illustrated with over 100 full colour photographs, many of them Cas’ own published here for the first time, and as well as with stunning facsimiles of the pages of Cas’ actual 1920 diary.

What they’re saying about
LOYAL TO THE HILL:

‘A complete contemporary Harrovian’s diary, unsculpted by hindsight, is a wonderful find and the immediate daily view of a 13 year-old new boy is rare indeed. Alexis has done such an impressive job on her father’s diary. Her commentary explains an astonishingly full array of details while breathing context of place and people into the wonderfully artless immediacy of the original text. It is very evocative.’

‘Loyal To The Hill is a window into a time and place about which this antipodean had no idea. I was bowled over the amount of research obviously undertaken: everything from train timetables to meteorological records to cricket scores. A fascinating read – I devoured it!’

‘This delightful book tells the story of a year in the life of a boy as he enters his new school. What a lovely boy he sounds: so enthusiastic about everything; intelligent; keen on games,lots of friends. I wish Cas had been in my House!’

‘WOW! Loyal To The Hill looks WONDERFUL and is utterly charming!’

‘A very special book, a truly great achievement! I particularly love the pencil on the book’s spine.’

‘Loyal To The Hill has inspired dozens of boys. The name of ‘Casdagli’ is going to be remembered and cherished for a very, very long time to come.’

‘The thorough and comprehensive content of Loyal To The Hill gives the whole picture of ‘Cas’ and his achievements, complete with actual diary and embroideries. The level of compilation is remarkable.’

‘I much enjoyed Loyal To The Hill’s’ and the many fascinating insights it gives into life on the Hill in Cas’ time.’

‘I LOVED Loyal To The Hill. I read it in two sittings, literally from cover to cover. I could see the adult Cas I knew in every line of the schoolboy’s diary: his self-possession and ability to be contained and content with himself; his loyalty to friends and to his own family and his energy to do everything to the best of his ability, pitting himself against ‘himself’ and not against others. Cas never sought approval from others or strove to please others. He was himself always and that comes through in the dairy. The research is unbelievable and the discoveries of a world, lost to us, is so interesting.’

‘I read Loyal To The Hill in two sittings. The book fascinates me firstly on the rich details of life it gives of England 100 years ago. Secondly, as my familiarity with literature about English public schools has been fiction-based, Cas’ chronicle of his first year at Harrow is appreciated precisely because it is NOT stranger than fiction. It is a real account of how a public school kid leads his life from day to day. The research is impressive and the commentary is excellent, without which it would have been hard to understand the Harrovian insiders’ lingo.’

‘Loyal To The Hill is a fitting tribute to an extraordinary man.’

‘I have not been able to put Loyal To The Hill down – it’s exciting and interesting with a great index and glossary!’

‘Cas would be rather surprised, perhaps, at what has been achieved with his schoolboy diary but he would be very proud of the beauty of the end product, Loyal To The Hill.’

‘Loyal To The Hill presents a Giant of Old who embodies the values of courage, honour, humility and fellowship. Numerous thanks to Cylix Press and Alexis Penny Casdagli for ensuring Cas’ story may be known for another 100 years.

Read this wonderful article about LOYAL TO THE HILL
Simply click on the image below then go to page 96 – and enjoy! 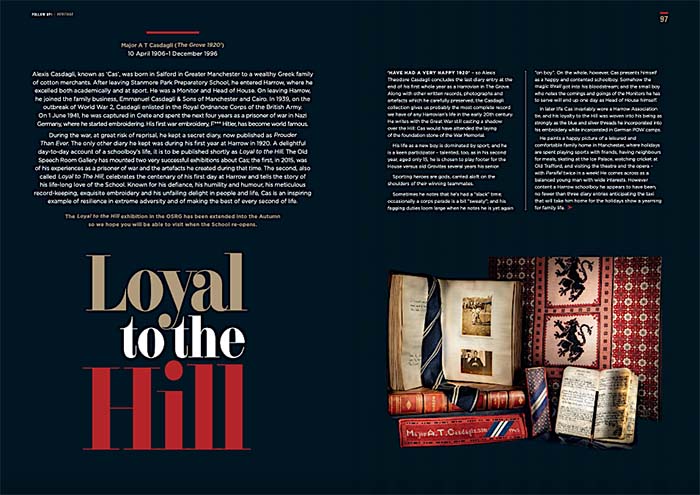 Commemorating the 75th anniversary of VE Day on 8 May 2020, this podcast celebrates Cas as an inspiring example of resilience and courage in adversity. Click on the image and listen to some of the defiant exploits of ‘Prisoner 3311’!