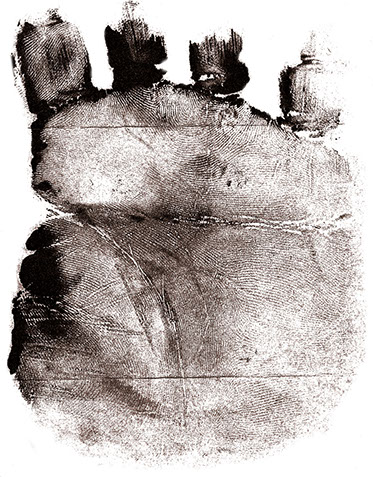 Casdagli’s unusual hand print. In Greece, in the villages, people put handprints on the
walls of their houses to protect them and bring them good luck.

I remember A T Casdagli’s last words to me. We were queuing up for some event – I forget what now, but probably a play.  He was quite elderly then. He was standing in front of me and we started to talk and then suddenly he told me ‘I’m Greek, you know!’ And those were his last words to me.
Philip Pilkington, the pianist, after a dinner at Harrow School, for Casdagli

Memories of Cas and Wendy are among my most treasured. To know them was to love them.
Kate, Myconos

The Chance Meeting Of A Life Time

In 1971, when my husband Don and I came from Rome to Athens on our way back to Australia, we decided to give Athens a go for 3 months. Hence we were looking for somewhere to stay without committing ourselves to a lease. When I picked up the Athens News and saw an advertisement from an English couple who wanted to let while they returned to England over the summer, it sounded ideal. So I called up, and was asked by a lady where we came from. We were invited around. My first glimpse of Wendy was a grand woman at the end of the room with swept-up red hair in a long dress. I was quite scared, but we were quickly put at ease. We must have passed the test, as I was invited around the next day – Don was at work – and Cas, as everyone called him, showed me the ropes. It ended in a walk through the market with Wendy and an ouzo about lunchtime poured by Cas, which was very strong! As we stayed in the house over the summer, we pieced together a little about them, especially when an embroidered map of Crete fell off the wall while I was cleaning. I read the reverse side with amazement. Wendy said much later that they had been very trusting, as she had left her diamonds behind, taped under the Singer sewing machine! We became great friends. We loved them so, and named our son Alexis after Cas. I call that the chance meeting of a lifetime.

The reverse side of the Map of Crete embroidery

A Latter Day Zorba The Greek

For my first birthday, Grandpa made this embroidery, with the MCC logo, ‘egg and bacon’ colours, cricket etc. It hangs in my office.  A couple of years ago the squash players who are “Jesters” in our squash club in SantaFe became interested in press articles about Grandpa, and I gave a talk about squash and creativity running through the generations. We had a great time talking about squash, creativity and history, and the next generation over a wonderful dinner. I think of Grandpa as a latter day Zorba the Greek and Prouder Than Ever will help me to remember to live life. 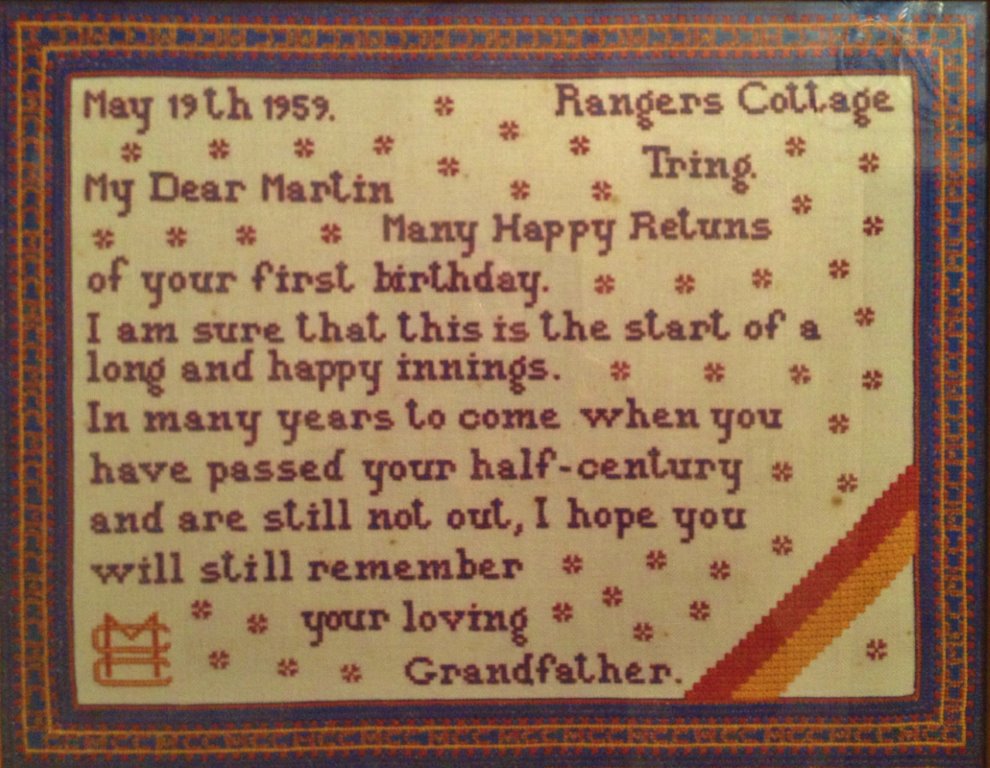 Simon in Leura, Australia writes ‘My grandfather’s humanity and concern for all around him shines through each page of Prouder Than Ever. We used to call him Grandpa Bobcat. I believe this was the result of us pestering him to read us a bedtime story every night one summer. The story was a kids’ abbreviated version of Old Yeller. He made a great show of disliking doing this before settling us down and reading to us. The hero of the story was an old dog and the villain of the piece a bobcat. He always made it clear who he favoured! 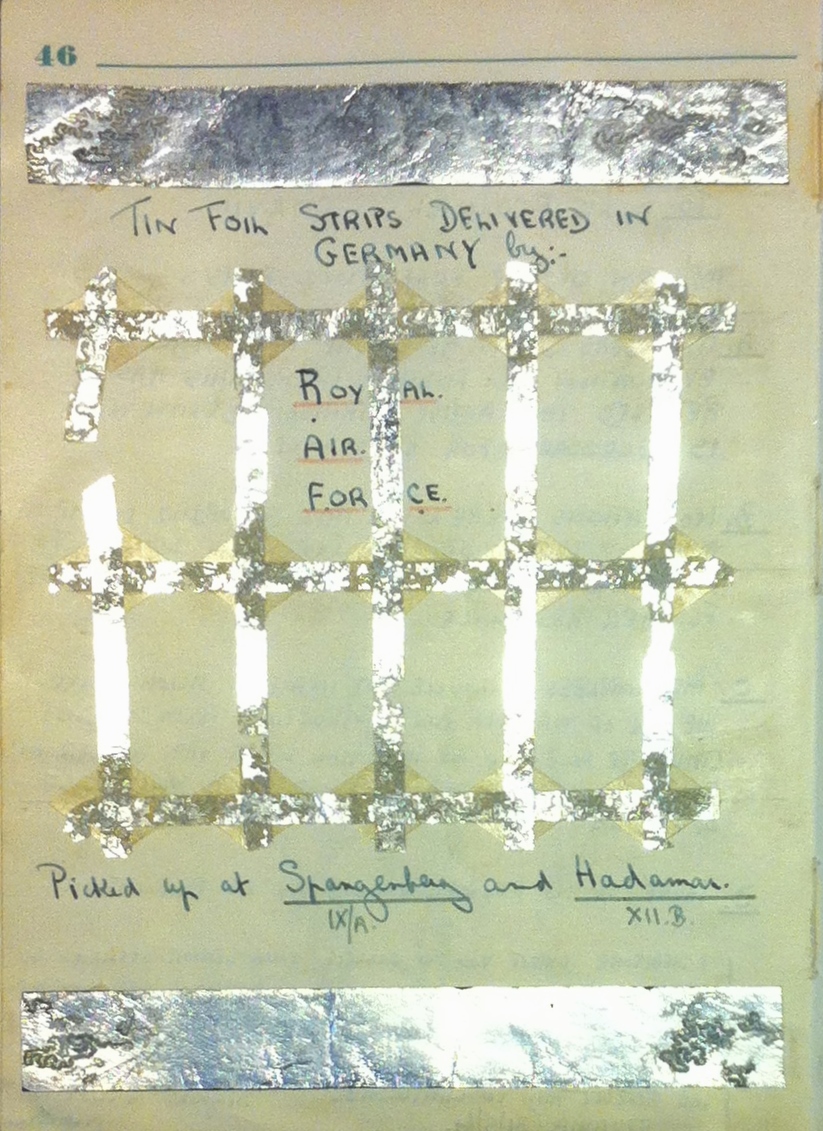 Jeremy from Tallinn, Estonia writes ‘I remember so well Grandpa telling me the story of the windows, the aluminium strips that the American & British bombers used to drop to confuse the German radar systems.  One morning, he found the camp grounds scattered all over with it and picked up some strips of it and stuck them in his diary.’ 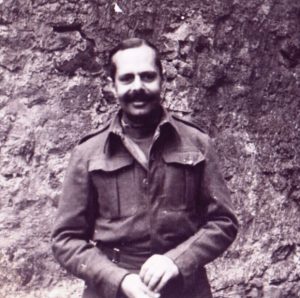 Since one year, I came to know from the book ‘Prouder Than Ever’ that Casdagli Uncle was a major. After one year, me and my younger brother Sunil are seeing each other, and today, after one year, me and Sunil got a chance to sit with each other alone before he leaves India to return to Bahrain. I told Sunil to read the British Red Cross blog. He read it and I am surprised Sunil came to know only today from reading it that he was a major.

When Sunil read it, he sent this message to you,

‘We all were honoured to meet Casdagli Uncle in person in 1985, not knowing at time that he was a British Army Major. Your immense efforts have brought back to life the reality of World War 2.

The Key
Your father didn’t talk about the war. He didn’t say anything. But I remember when I was a girl, just after the war, in 1945 – I can’t remember where I was now, or who was there – but your father gave me a very, very small piece of folded paper. He pressed it into my hand and told me it was ‘the key’ and to keep it safely. The paper was thin, almost see-through but yellowish. Just like ‘Bronco’.

‘Bronco for the bigger wipe’
When the paper was unfolded, there was tiny writing in ink on it. I stuck it on the first page of my birthday book with a piece of sellotape which left a yellow mark. I don’t know why your father gave it to me. He might have told me but because someone else was in the room, maybe my mother, I didn’t hear it.I kept it for fifty years.
Valissa Gordon, Surrey

Panos, my husband, and I treasure and USE all of the embroideries A T Casdagli gave us. Like almost everyone, we called him Cas and his wife was called Wendy. I oft times wonder how we could be so blessed as to have had Cas and Wendy in our lives. 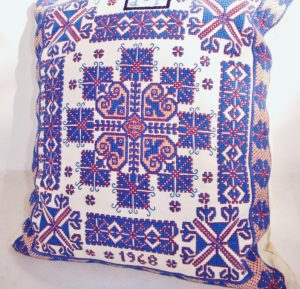 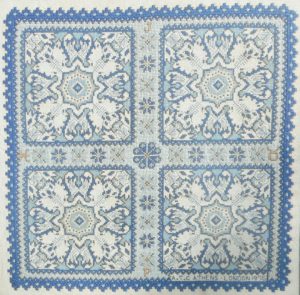 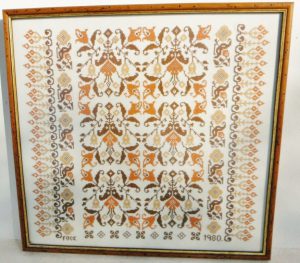 This one we really treasure because of the humour.  Your father apparently never liked it but your mother encouraged him to complete it.  One evening, in the sitting room, he did finish it, wadded it up and threw it at her, stating ‘There!’  Instead of his normal ATC at the bottom he’s written FUCK. (1980) 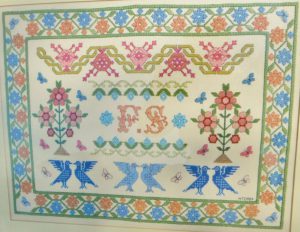 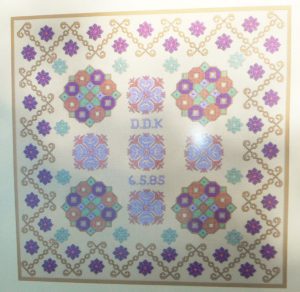 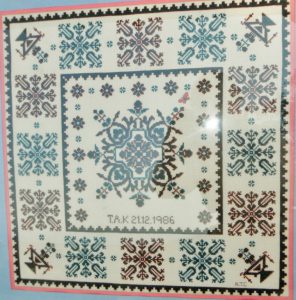 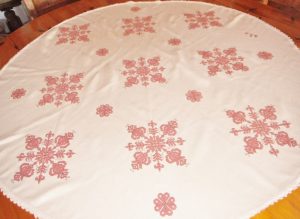 This is another lovely cloth Wendy presented to us after Cas’ passing.

I had these pocket patches framed. The purse Alexis Penny gave me after Wendy’s death in 1999. ‘WAC’ is for ‘Wendy and Cas’. Alexis Penny says it was made by Cas for Wendy at a time when there wasn’t much money in their lives.

Uncle Leck was the first person to call me ‘Daffers’! He would never get into my VW Beetle car. I bought it from a fellow printmaker in 1970 and drove it to its destiny. Its running boards had rusted through. Uncle Leck said it was ‘Hitler’s car’. Knowing he’d been in prison in Germany, you couldn’t blame him. You had to appreciate and respect what he’d must have been through. The memories were too strong. 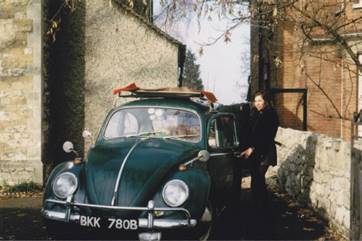 ‘Daffers’ and her Beetle. In 1934, Hitler commissioned Porsche to design a simple cheap car which, much later became the Volkswagen Beetle.

You know I only started embroidering again because of Cas. I had such unhappy memories of my convent days at Tildonk as a child doing boring ‘ouvrage’ every afternoon that I never wanted to do needlework again. 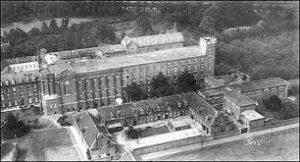 I remember your father doing a piece with a beautiful red lobster in each corner. We were watching television, maybe ‘That Was The Week That Was’ so it must have been ’62 or ’63.
Minkey Pilkington, artist, London, also known as W. Gloria E. Muldoon 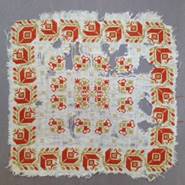 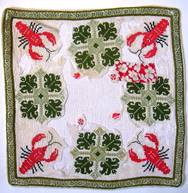 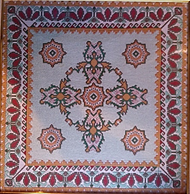 Charlotte, who’s six, thinks Uncle Leck is her grandfather. She asked me this morning,

‘Do you think he’d like me?
‘Of course, he’d like you. He’d like you a lot,’ I said, ‘but he’s not your grandfather. He’s your great great uncle. Your great great Uncle Leck.’
This embroidery of his is in Charlotte’s bedroom above her chest of drawers. It’s not a big room so the embroidery is quite predominant. Charlotte never met her great great Uncle Leck but she thinks about him a lot.
Christopher Casdagli,
KPMG Head of Global Leadership Talent Acquisition, London

Pictures Down The Stairs

Down the stairs of the Lane family home hang eight embroideries by Casdagli. The first was made for his niece, Nadine, and her marriage to Michael Lane and the rest were for each of their seven children. 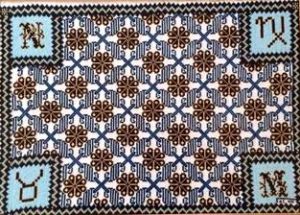 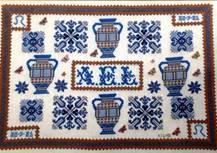 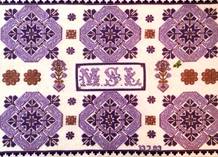 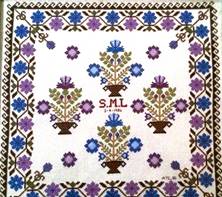 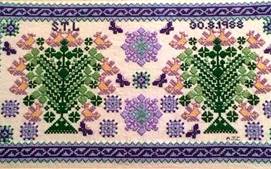 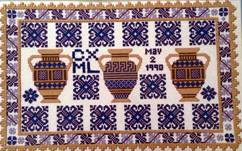 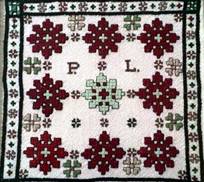 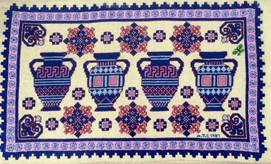 I was feeling somewhat beleaguered going through a rather prolonged spell of ‘bad stuff’. I have no idea of the year. As I was leaving the Casdaglis, Mr Cas gave me a small, glass talisman. It was blue, roundish and about the size of a 50p piece with the outline of an eye and pupil in white or at least a light colour. How so like him not to make light of my feelings or to advise that a brisk walk or new hobby would solve my problems. His belief that my fears were not imagined gave me strength. That small, thoughtful act had a huge impact on me.  A truly, special person I was lucky to have known.

In Greece, a μάτι, or ‘eye’, like this, is believed to keep you safe 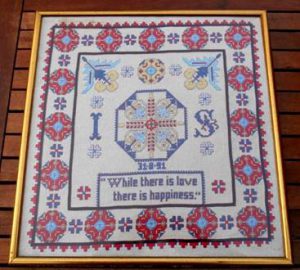 This embroidery is so special to us. We remember with such joy dear Leck being with us to celebrate our marriage and giving us this wonderful gift. 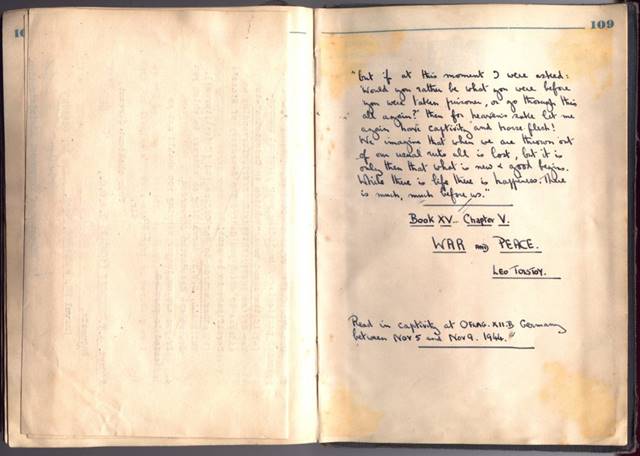