By Chance In A Car Park

In a car park by the Fort of Chania, a town on the northern coast of Crete, covered in dust from a dawn start, we were saying the very last words of the last take of last shot on the last day of filming for Capture in Crete when, suddenly, a man appeared between our two filmmakers, James Morton and Elias Staris, videoing us on his mobile phone.

It turned out to be the journalist, Giannis Aggelakis, who, looking for somewhere to park had, by chance, come across us. 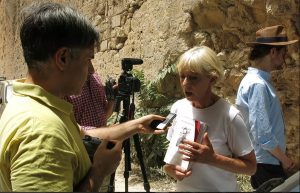 That night, he interviewed me for the Cretan newspaper, Agonas Tis Kritis. His article is the first time Casdagli’s story has been told in Greek. The headline says ‘Fuck Hitler! – the story of the English Major of Greek origin, who fought in the Battle of Crete and resisted with the Nazis with a needle.’ You don’t have to speak Greek to enjoy it as the photos are great too so do click on this link: