The Hadamar Kids Club is the only club to which I belong. Our members are few and, inevitably, will be less. Although the HKC has been going for years and hopefully will for many more, we only had our very first meeting in London on 18 August last year, which, we believe, will also be our last. That made it a deeply poignant and special occasion. Don’t get me wrong – anyone can join the HKC, as long as your father was a prisoner of war in the ghastly camp of Oflag XII-B Hadamar, near Limburg, in Western Germany. This camp was 350 meters away from the Hadamar Euthanasia Centre, where 14,420 people were murdered by the Nazis during the Second World War.  Many were Jewish people, many elderly, many disabled people and children. They arrived by train about once a week. Their graves could be seen from the north side of the prison, once a school, and from the front upper floors which also overlooked the railway station. Following a trial at Nuremberg, seven of the Centre’s Staff, including its director, were found guilty of violating international law and, exactly 73 years ago today, were hanged on 14 March 1946.
Present on our beautifully sunny Saturday were Christopher, son of Hugh Peter Laurence, the Camp’s Chaplain; John, all the way from South Africa especially for our meeting, son of Captain Guy Nicholson, the founder and conductor of the Camp’s choir and orchestra; Ian, son of Major E. T. Dobson of the South African Engineer Corps, a talented artist whose drawings of the camp aided at least one of its inmates, Brigadier George Clifton, eventually to escape; PJ Brooke-Taylor, our driving force, all the way from New Zealand especially for our meeting, which she arranged, daughter of Major ‘Jo’ Johansen, later to be Lieutenant-Colonel C.C. Johansen, OBE, ED. And BAR. And then there was me, daughter of Major A T Casdagli.
Dad and Jo were great friends. In 1944, Jo drew a picture for Dad to embroider. This tiny, exquisite work is the result: The Yacht
I thought the other members might to see to see the Fuck Hitler Bookmark embroidery, which I’d  found in a box in the attic in 2012, so I’d brought it with me. PJ took it in her hands and examined it tenderly,
‘I’ve grown up with the story of this bookmark and your father’s other embroideries,’ she said, ‘my father often talked of them and of him…’
I didn’t know that. It was news to me and it was moving. You see, PJ and I only made contact through a series of quite unusual coincidences, but that’s another story, which surely one day will be told… 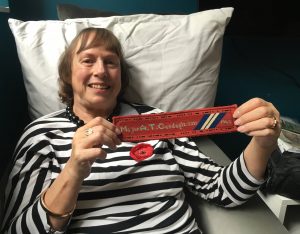 PJ with the Fuck Hitler Embroidery