I learn Greek. Francoise in our Greek class, like me, had a father who was a Prisoner of War. Jean Pierre was a Corporal in the Meteorological Service in the French Army. He was captured on 21 June, 1940 at Padoux in the Vosges in north-eastern France along with many thousand others, including the philosopher and writer, Jean-Paul Sartre, who was also serving as a meteorologist. Next day, France surrendered to Germany.

Jean was imprisoned in Stalag XII-D, Trier in Germany and was sent out daily to labour in a school of agriculture. When he was liberated by the Americans in 1945, he left prison with two small suitcases. In one case were strawberry plants which he brought home and propagated. Since then, Francoise and her sister have continued propagating them and give them to friends. Francoise gave me some of these strawberries plants in April. I planted them in pots because it was cold, but next year they’ll be in the ground. The strawberries are small, but very dark and flavourful. They must have tasted wonderful in prison. No wonder Jean brought them home. 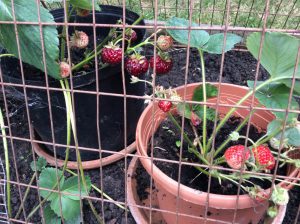 Jean Pierre’s strawberries in my garden