A few minutes’ walk from London’s Imperial War Museum, shrouded by trees and shrubs, is the Tibetan Peace Garden, an oasis of calm in the city. The day dawns gloriously and the air’s full of autumn sun. We’re making another Cylix Press video there for and about my father, Major A T Casdagli. Marina Deligianni, with Dimitri Gioni on guitar, is to sing Song of Songs from The Ballad of Mathausen by the Greek composer Mikis Theodorakis, with lyrics by Iakovos Kambanellis, a prisoner in the Mathausen concentration camp from 1942 until the end of the war. Song of Songs is part of the music for Capture On Crete, our documentary about my father’s capture on that Greek island in 1941, and will be a sort of harbinger for it. Jamyang Dhondup, the Manager of the Tibet Foundation, welcomes us warmly. 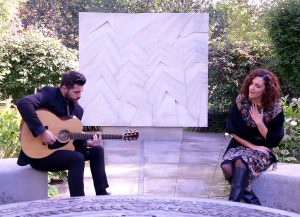 Dimitri Gionis and Marina Deligianni
Suddenly, during the shoot, a butterfly, a Red Admiral, flutters into the Garden and stays with us for the rest of the morning. While a prisoner of war in Germany, my father sewed beautiful embroideries. His favourite design was of a butterfly and, after liberation, he went on embroidering butterflies all his life, which is why the cylix of our logo holds a butterfly, so this was very touching.
After the filming, Jamyang wrote to us ‘It was a pleasure you sang that beautiful song in the Tibetan Peace Garden. I am very much moved and impressed by your inspiring project. I sincerely wish that the film Capture On Crete will inspire millions of individuals for peace in the near future. I always firmly believe that one person can make a difference in the world through his or her act of compassion and vision.’ His words echo those of the Dalai Lama on this mural I see every time I go to the studio ‘If you think you are too small to make a difference, try sleeping with a mosquito’. 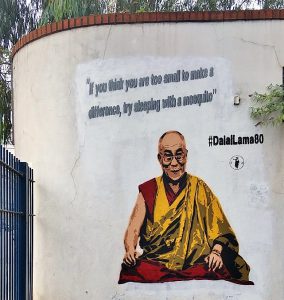