From a Prisoner’s Daughter 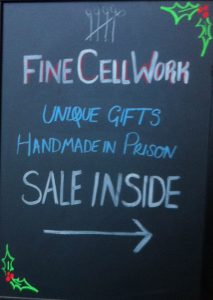 Esther Freud, the novelist, who I’d never met before but whose books I’d read, gave me the card for Fine Cell Work’s Christmas Fair. When she explained, ‘It’s a sale of wonderful embroideries and sewing made by prisoners,’ I was astonished. Prisoners embroidering! Just like Dad! I felt overwhelmed and tried to steady myself. As soon as I could, I went on the Fine Cell Work website and was completely enthralled. I immediately changed all my plans for the day of the Fair so I could go. My father, Maj A T Casdagli, was a prisoner of war in Germany. Whilst in prison, he suffered enormously from hunger and cold, but the worst enemy, as any prisoner knows, was boredom. One freezing day in December 1941, he was given a bit of canvas and, with wool from a fellow prisoner’s pullover, started his first embroidery. When it was finished, it cheered everyone up as in the narrow border round the edge, he’d embroidered, in Morse code, ‘FUCK HITLER’ three and a half times! At great personal risk, he pinned this work up on the walls of the all the prisons he was in, but, fortunately for him, the Germans never noticed! 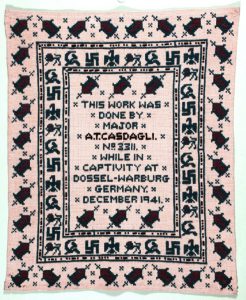 The work on show in the Christmas Fair was awesome. I loved the beauty, exquisite quality, skill, ingenuity and wit of it and am all admiration for Fine Cell Work itself. I took a couple of my small father’s prison embroideries with me and was deeply moved when I saw them in the hands of two former prisoners who were present and still embroider. When one said, ‘Nice work, very neat,’ I felt so proud for Dad. People are imprisoned for many different reasons, some just and some unjust, but in relation to time, all prisoners are the same. I think this embroidery Dad made of a verse of a poem written by Oscar Wilde, when a prisoner, just about sums it up. Thank heavens for the brilliant Fine Cell Work and for its long-devoted supporter, Esther Freud. 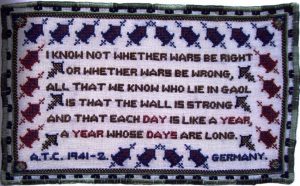