The Second World War ended three years ago but Greece is still reeling from the effects of the German Occupation and is now in the grip of civil war. It’s being torn apart, neighbour against neighbour, village against village. Volos, a port on the west coast, is in the thick of it. The fighting’s in the mountains behind the town. You can hear the sound of gunfire. It’s always there. And the smell of danger in the air.

What’s next and who and where? 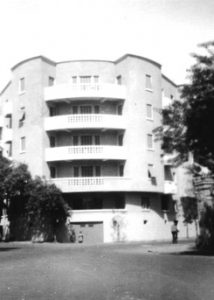 Volos was devastated by Allied bombing, but there’s this new block of apartments overlooking the harbour. It shakes when rockets are fired from warships there up into the mountains where the fighting is. The block shakes too when there’s an earthquake. It’s hard to tell which is which sometimes.
On the third floor of the building, in the apartment at the front with the balcony, live a pair of newlyweds. He’s dark and handsome and she’s beautiful with flaming red hair. They’re tough, British. They’ve both seen and done things they don’t ever want to talk about. He was a prisoner of war for four and half years in Germany and she was a spy, a captain in the SOE (Special Operations Executive). Although he’s Greek by birth, he’s anglicised and is the British Consul in Volos. Lots of people would like to see him dead.

It’s Thursday, 12 August. Every Thursday afternoon in Volos, the dead of both sides are bought into the square and laid out with their boots by their heads for their families to take the bodies. It’s no place for babies and she’s pregnant – any day now. They’ve got to get her to a hospital where she’ll be safe. That Thursday, he drives her to a makeshift airstrip in his jeep where an RAF helicopter is waiting. The young pilot blanches at the sight of her. She’s huge. Too big for the seat so they tie her in with rope. Leaving the man behind, the young pilot and the pregnant woman take off. It is 200 miles to Athens, their destination, and they’re worried she’ll go into labour whilst in flight. But they make it and she’s taken to the Military Hospital in Phaleron, a mile or so south of the city, by the sea, where she’s safely delivered of a daughter.

Which is where I come in.

A few days later, my father, A. T. Casdagli, or Cas as most people called him, came to collect Wendy, my mother, and me and took us back to Volos. 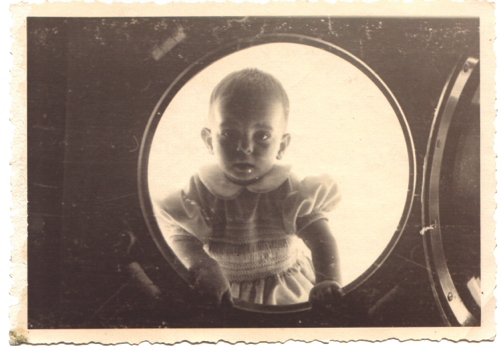 The following year, on 19 September 1949, I was christened Penelope Sherrie with water from the upturned bell of the British destroyer, HMS Euryalus, in the port of Volos. Legally, the ship was British ‘soil’ which meant my parents could get a British passport for me in case an emergency exit from this war-torn zone was necessary. That’s a photo of me, looking through a porthole.

So that’s who I am and how I got here.

In 2012, I decided my father’s prisoner of war diary should be published.
It’s a great story and I felt it’s what he’d have wanted. Now it’s almost time for PROUDER THAN EVER to be launched. Compiling it and getting it ready for publication has been full of adventures, some fantastic and some a bit too close to the edge for my taste. I was talking about it to Dave West of Studio 22,
whose doing the final typesetting of the book, and said,
“It’s been a ride!”
He replied,
“And it’s not over yet!”
I laughed. He’s right. The next bit’s just beginning and I’m writing this hoping you’ll come with me.