Among The True Elect

I don’t think my father, A T Casdagli, ever met Patrick Leigh Fermor, famous for his abduction of the German General Kreipe on Crete on the night of 26 April 1944. But it is impossible that Paddy who lived in Tara, the now legendary villa on Gezira Island in Cairo, during the war, did not know the name Casdagli. The magnificent Villa Casdagli, sadly torched by rioters on 1 February 2013, was a well-known Cairo landmark, and the Casdagli family, who lived there, were extremely wealthy and influential. I can’t be sure, and, in the absence of documented material either one way or another, it is, perhaps, permissible to speculate it’s highly likely that they did meet – and if they did not, then they should have done! Surely, they could have encountered each other at Shepheard’s Hotel or the Gezira Sporting Club in Cairo or brushed shoulders in Athens at the GB – the Grande Bretagne Hotel – or, perhaps, even better, sat down together in a simple kafeneon in a village square somewhere in their beloved Crete. It’s in Crete I most easily picture them. I see them handsome, fit and bloody-minded, bent over a jug of wine and a few olives, comparing notes delightedly and lapsing, perhaps almost inevitably, from their native English into their fluent, beautifully learnt Greek. However, I did met Patrick Leigh Fermor and the circumstances that lead to that meeting are, I think, extraordinary enough to warrant telling.
In September 1964, aged 16, I was travelling with my mother on a boat from Venice to Piraeus. I was to spend almost a year in Athens on my own before going to the Central School of Speech and Drama to train as an actress. Our boat stopped for half a day in Corfu. Although it was lashing with rain, my mother and I disembarked to explore the town. We didn’t get very far. A storm broke and we rushed into the nearest place to shelter, a cavernous, darkly lit, antiquated café, which didn’t feel Greek at all. It overlooked a large patch of ground, turning in the downpour to chocolate-coloured mud. Apart from a stocky man sitting pensively at the top of a table facing the door, who didn’t look Greek at all, we were quite alone. I noticed the man, while we warmed up, occasionally look at us. This wasn’t unusual. My mother, Wendy, a Captain in the Special Operations Executive in Cairo during the war, was still very beautiful with glorious red hair.Suddenly, the door swung open and in ran two men, muffled like gangsters against the weather. They greeted the man at the table, who now ordered lot of drinks, and sat down and all three chatted loudly. Due to the deluge outside, we couldn’t quite hear their conversation, but it was definitely in English. Then a brandy arrived at our table for my mother and an invitation to join them. One of the men looked just like the actor, Albert Finney, whom I really admired and who, like Dad, was born in Salford. We went over and soon learnt our host was Lawrence Durrell, the patch of mud a cricket pitch, the café Italian, and the man who looked like Albert Finney was Albert Finney and the third man was the film director, Karel Reisz. When Durrell discovered I was going to live in Athens for some months on my own, he told me I had to meet an artist called Maro Stathatos, neé Vatimbella. He scribbled her address and her telephone number on a cigarette packet and assured me – and my mother- that she’d make sure I’d meet ‘all the right people’ and that I’d adore her. He was right on both counts and, in spite of the great age difference, Maro and I became firm friends.
I left Athens in the summer and, although we corresponded, didn’t see Maro again until, in 1987, she travelled to London to stay with her son, John Stathatos, the poet and photographer. She was now in a wheelchair and, I believe, about to be diagnosed with some kind of dementia. John decided to throw a party in her honour. Only her most cherished English friends were invited, probably a dozen of us, and among them would be Paddy, who happened to be in London. The party was in the top room of John’s house in North London, under the eaves of the roof. I don’t know how John managed to get Maro and wheelchair up there but there she was, exquisitely dressed and radiant, her eyes sparkling. In his poem about Maro, A Portrait of Theodora, Durrell perfectly describes her look:

‘I recall her by a freckle of gold,
In the pupil of one eye, an odd
Strawberry gold…’

Before long Paddy arrived. He was everything that is said about him, charming, debonair and a wonderful raconteur. Maro and he were thrilled to see each other again. Together they set the party to a different rhythm, of other times full of a wildness and gaiety that only sheer intelligence and a shared past can bring about. It was delightful to see them sparring, reminiscing and teasing each other. Then Maro said,
‘Paddy, do tell us the story of the General, and how you kidnapped him! It’s a marvellous story and you tell it so well.’
Paddy looked rather embarrassed.
‘Oh, Maro, it was so long ago and everyone knows what happened anyway.’
‘No,’ said Maro quite firmly, ‘you must tell it.’
There was something in her voice made him look up and, in that split second, something flashed between them. Maro was definitely demanding of Paddy not to refuse her in front of her guests. I also believe, in this moment, these friends for so many decades both realised this was the last time they’d ever meet, which was correct. Maro died two years later. But there was something else that does not go easily into words. Durrell’s poem about Maro ends:

‘Now only my experience recognizes her
Too late, among the other great survivors
Of the city’s rage, and places her among
The champions of love – among the true elect!’

If Maro was ‘among the true elect’ then, of course, Paddy was too. She was reminding him of that and inviting him to do something special with her and for her, something we would all remember, something to kick death down the stairs, something that without her asking it of him, he could not or would not be willing to do. There was a pause. Paddy looked down into his glass. I held my breath. I thought he was going to refuse her. Then he said,
‘Well…’ and he was off.
He gave the story a hell of a spin. Maro shed her years and looked just like she looks in the photograph below. She sat in her wheelchair as if it was a joke and belonged to someone else. She kept feeding Paddy with questions, prompting, cajoling him to go faster, to go back to collect a detail, to go slower so we guests could visualise the scene for ourselves. She was our Queen and Paddy was her gallant and we the guests knew, with adamantine certainty, that we were witnessing – no – that we were part of an extraordinary evening. And when Paddy finished speaking, we guests, as if one, got up to leave. We paid our respects to dear Maro and thanked Paddy again his wonderful re-telling of that powerful, historic affair and left. It was, as you see, quite unforgettable.
Something else gives that evening, in recollection, a special and even more poignant resonance. Only after my mother’s death in 1999 did I learn from several of her closest friends that she and Paddy had had an ffair in Cairo, before she met my father. And an affair is just what it was, apparently – just one of those things – but no less delicious for that! I don’t know if my father ever knew but I wish I had and had been able to tell Paddy I was Wendy’s daughter. O, the slender threads that bind us! 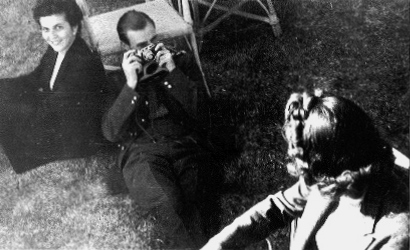 Maro, Paddy and Eve Willis at the Royal Yacht Club, Alexandria, November 1941,
Photograph by David Smiley, courtesy of the Imperial War Museum (Private Collection)
Adapted from my article in The Philhellene, January 2016