A Butterfly Saved My Life! 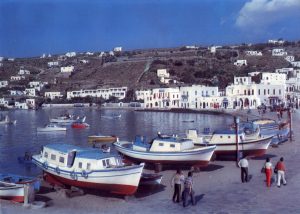 Quite out of the blue, one day in Myconos in the mid 1960s, back in the day when there were only two cars on the whole of that island, one for the Mayor, the other belonging to Niko Kremithes’ the taxi driver, my father, Major A.T. Casdagli, who lived there spring and autumn with Mum in their house just above the Olympic Office on the Harbour, walked into the shop of his dear friend, Vienoula, the now legendary weaver, and announced:
‘A butterfly saved my life!’ 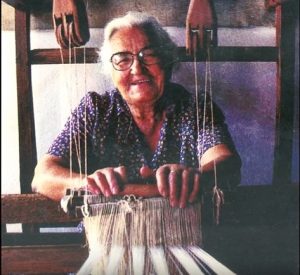 What a peculiar thing to say! But I know it’s true, because Vienoula’s daughter, Anna, decades later, told me about it. That statement had stayed in her mind: mysterious and impossible, how could so fragile and ephemeral an insect as a butterfly save a man’s life?
Casdagli, Dad, was taken prisoner in Crete in June, 1941 and spent the next four years in German prisoner of war camps. One, Oflag IX/A-H Spangenberg, was a harsh moated castle built on a hill of rock, from which there was no escaping. A party of those incarcerated decided to clear the fetid moat of its unspeakable debris, so they could at least get some exercise – overcrowding was chronic – or even play a game or two of cricket. 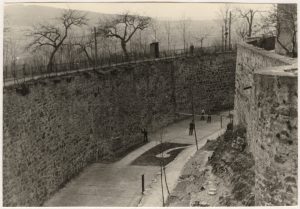 The Moat, courtesy of the International Committee of the Red Cross

During this process, Casdagli found a chrysalis in the mud and kept it in a matchbox.  Here’s the label he soaked off one such matchbox – maybe it’s even the one he kept the chrysalis in –  and brought back with him after liberation, He looked after it until one day, as he writes in his diary, Prouder Than Ever, ‘It shed its skin after forty days of the most interesting performances in natural history’ and hatched into a swallowtail. 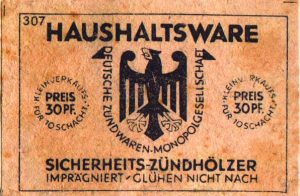 Another prisoner drew the swallowtail for him to embroider and he went on embroidering that swallowtail not just for rest of the war, but for the rest of his life. You see, it was found in prison mud, as was he, but transformed itself a creature of beauty, that, unlike him, could fly high over the walls of captivity into freedom, and so, he vowed, would he. And that is how a butterfly saved my father’s life. 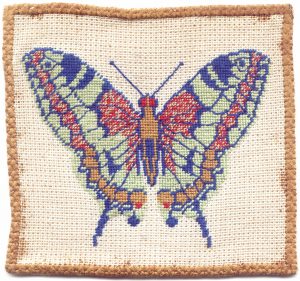