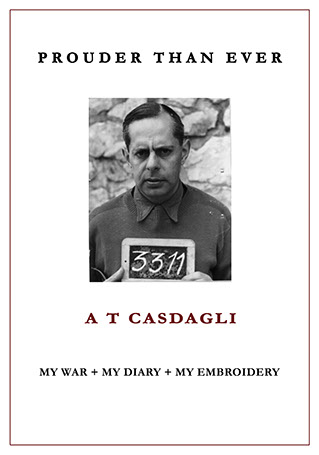 ‘Before fancy and imagination take too firm a hold,
I want to get down on paper the true facts, a story
which no one but myself can write.’

Entry for 1 June 1942, first anniversary of his capture

by A. T. Casdagli
compiled by Alexis Penny Casdagli
276 pages with 135 colour illustrations

Published in a Special Limited Edition of 1,000 numbered copies,
signed by Alexis Penny Casdagli. Each copy comes with its own unique
matching-numbered Fuck Hitler bookmark.
Price: £19.99 – 20% of the price of each book is donated to the British Red Cross
Paperback, perfect bound, 240 mm x 165 mm
Printed in England by the Pureprint Group on white paper from renewable sources
and scarlet Colorplan from G . F Smith
Publication date: 28 October 2014
ISBN: 978-0-9926759-6-7

The author, Major A. T. Casdagli was captured in Crete on 1 June 1941 and taken to Germany where he was held in various prisoner of war camps. There, in spite of risk of confiscation and reprisal, he kept a secret diary. It is presented here for the first time, illustrated with his photographs, embroideries, prison memorabilia and documents, all of which he carefully preserved, as if he knew this astonishing, honest and inspiring historical document would inevitably be published.

What they’re saying about
PROUDER THAN EVER:

‘Fifty years ago I met Alexis Casdagli, the father of my dear friend Alexis Penny. I was very impressed by the fact he did embroidery. Reading this book, so many years later, I am once again impressed by the man, not just for the needlework but for his bravery and integrity. Through his personal diary he has left an important legacy for future generations to learn and understand the horrors of war and loss of freedom. He has also, unwittingly, given us an insight into a truly decent human being.’

‘Casdagli was a remarkable man. His story is both moving and inspirational. What is captivating about Prouder Than Ever is that there are so many different ways of identifying with it.’

‘It’s very moving and important what you are doing, telling your father’s amazing story with such love, compassion and insight.’

‘Amazing man, amazing book. I’ve read it twice and probably will a third.’

‘I couldn’t put it down. Prouder Than Ever is so perfect, pure and a valuable informative historical document. I felt immense affection for Casdagli.’

‘Prouder Than Ever is not only an important primary source for the history of World War II, it offers a rare insight into the cosmopolitan world of the early twentieth century Anglo-Greek diaspora.’

‘This book is a treasure – a remarkable testimony to, and indeed by, a very decent and humane man who had to cope with all difficulties of incarceration by the Germans for most of the war after capture in the Battle of Crete. I found it both touching and engrossing as a historical document, with extremely helpful notes.’

‘Prouder Than Ever is absorbing and so well written. It will touch all those families whose fathers were Prisoners of War. Each of us is a part of that.’

‘Prouder Than Ever is a truly wonderful book.’

‘Beautifully paced, a huge effort of scholarship, inspiring and unfussy, Prouder Than Ever is a little miracle of a book.’

‘You are in supreme control of your material. I’m full of admiration for your achievement.’

‘Prouder Than Ever is utterly compelling. This book should be a set school text on the Second World War as it shows the real privations of POW camps. The illustrations, especially the documents are wonderful and the endnotes provide great insight.’

‘This wonderful new publication is an impressive, detailed and important historical document. I hope Prouder Than Ever will be translated into Greek as I believe it would be of great interest to the Greek people who endured this difficult period in their history.’

‘It’s incredible he could record all this under the circumstances. I’m amazed to see so many photographs and so lovingly put together.’

‘I could feel his frustration with his commanders and the situation; and his strong ethical stance as he took responsibility for his men. He was extraordinary.’

‘It’s brilliantly written. I was very touched and I had a lump in my throat, especially at the end.’

‘WOW – a fascinating read! I love the images.’

‘I think I’m falling in love with your father.’

‘A magnificent book I have not been able to put down since beginning it this afternoon.’

‘I am riveted it by it! I’m on the edge. What times they lived in. It’s crying out to be made into a documentary or something more. We think it’s really important.’

‘Feel a bit bereft after finishing your dad’s journal. The truth is I am missing Casdagli’s voice from the diary, even though the events were harrowing. His compassion and fairness shone through in adversity. What an amazing document. It will be an important book.’

‘Wow, it reads like some piece of fiction, too painful to be true. What an absurd reality, what an insane species we are.’